The “geomagnetic storm” contains particles blasted out from the sun’s atmosphere in an explosion known as a solar flare.

Scientists are warning that as the geomagnetic particles hit our planet, they could wipe out satellites, GPS navigations systems and mobile phone signals.

The arrival of the solar storm will also coincide with the formation of equinox cracks in the Earth’s magnetic field – this usually happens on March 20 and September 23 each year.

As a result, stargazers are more likely to be able to see the Northern Lights in parts of Scotland, Northern England as well as north Michigan and Maine in the United States.

What time will the Earth be hit by the storm?

The US National Oceanic and Atmospheric Administration (NOAA), who spotted the solar storm using two NASA satellites, said: “A minor geomagnetic storm watch is now in effect for the 14 and 15 March, 2018. Aurora may be visible at high latitudes.”

NOAA’s current estimate is that the solar storm will be a G-1 or ‘minor’ storm – the highest end of the scale is G5.

NASA nor NOAA have not yet indicated what time the solar storm will hit yet, although G-1 activity is listed for both Wednesday and Thursday. 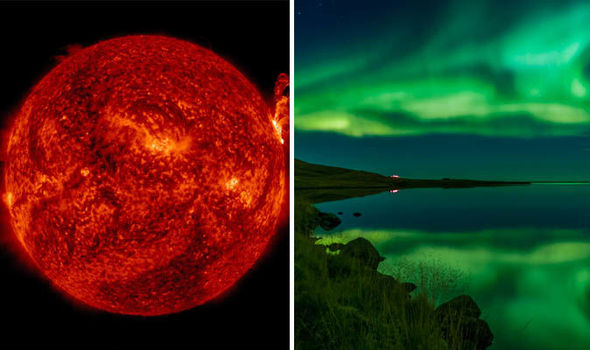 Solar Storm tomorrow: What time will the Earth be hit by the March 2018 storm? 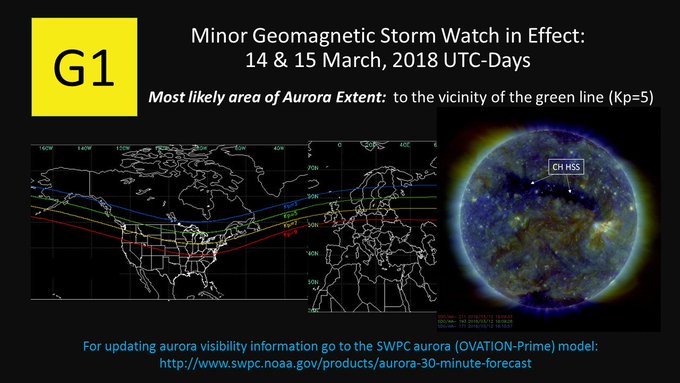 A G1 Watch is in effect for the 14 & 15 March, 2018 UTC-days. Enhancements in the solar wind due to the anticipated effects of a coronal hole high speed stream (CH HSS) are expected to cause the escalaed geomagnetic responses. Visit http://swpc.noaa.gov  for the latest info.

What are the effects of a solar storm on Earth?

NASA says the effects of a geomagnetic storm will lead to the Earth’s magnetic field being “peeled open like an onion allowing energetic solar wind particles to stream down the field lines to hit the atmosphere over the poles”.

The effects can cause the planet’s magnetic field to rapidly drop between six and 12 hours, after which the magnetic field will take a few days to recover.

Additionally, a surge of particles can lead to high currents in the magnetosphere, which can lead to higher than normal electricity in power lines, resulting in electrical transformers and power stations blow outs and a loss of power.

What is the worst solar storm in history?

The solar storm of 1859, also known as the Carrington Event, is the worst recorded in history.

It was the first documented of its kind and was named after Richard Carrington, the British astronomer who recorded it.

Telegraph systems across Europe and North America failed causing widespread fires, while auroras were seen across the world as far south as Cuba and Hawaii.

A solar storm of this magnitude today would cause huge devastation to our technological-based society.

The solar storm of 2012 could have sent us into a dark ages scenario but luckily it missed the Earth’s orbit by a margin of nine days.